I ain’t lookin’ for prayers or pity/ I ain’t comin’ round searchin’ for a crutch/ I just want someone to talk to/ And a little of that human touch. —Bruce Springsteen, Human Touch

Convicted murderer Peter Collins died of cancer after 32 years in a Canadian prison. In that time, he became a champion of prison rights, and made a short film called Fly in the Ointment about a prolonged period that he spent in solitary confinement:

Somehow, I felt [my wife’s] fingers on my leg. Shocked and excited, I opened my eyes only to realize it was a fly walking on me. I was greedy for human touch so I closed my eyes and pretended it was her fingers. I tried to stay perfectly still because I didn’t want to frighten the fly off and be left alone.

After that, Collins would bite his cheek and apply a mixture of his own blood and saliva onto his skin to attract the flies that had become his only source of living touch.

Owing to smaller household sizes, greater migration, higher media consumption, and longer life expectancy, people today are more isolated than at any other time in human history. Just like we crave food when we are hungry, and crave sleep when we are tired, so we crave touch when we are or feel alone. When someone is no longer in our orbit, we do not say that we are out of sight, or out of hearing, but out of touch. Maybe we feel that we ought to make contact. More than a mere indulgence, human touch is, like food and sleep, a visceral but neglected need that is increasingly being met by third parties such as massage therapists and even professional cuddlers.

As a wine taster, I thought that smell was the most neglected of our senses. But in our society touch is even more so. In the 1960s, Sidney Jourard, a psychologist at the University of Florida, observed the behaviour of couples in coffee shops around the world. He found that, in the space of an hour, couples in Puerto Rico touched each other 180 times. This compared to 110 times in Paris, just twice in Florida, and not at all in London. Jourard also found that French parents and their children touched three times more than their American counterparts.

The fear of touch in northern, English-speaking countries is deep-seated. In Victorian England and 19th century America, people took to the language of flowers, or floriography, to express feelings that could not otherwise be expressed. In a book on child rearing, first published in 1928, the influential American psychologist John B. Watson advised:

Never hug and kiss [your children], never let them sit on your lap. If you must, kiss them once on the forehead when they say goodnight … In a week’s time you will find how easy it is to be perfectly objective with your child and at the same time kindly. You will be utterly ashamed at the mawkish, sentimental way you have been handling it.

Still today, many people flinch if the person returning their change accidentally brushes their hand. Generally speaking, the fear of touch is much greater in men. Touch is seen as soft and effeminate, and many men are keen to appear macho or at least masculine. With women, they fear that their touch will be interpreted as a sexual advance. With other men, they fear that it will raise doubts about their sexuality, or that it will feel awkward, or that it will be rejected, or that they might enjoy it a little too much. With children, with many schools now operating a strict no-touch policy, they fear that it could raise suspicions of paedophilia. So with the exception of handshakes and the occasional awkward ‘man hug’, men must forego touch, especially warm, intimate touch, simply to reassure everyone, and perhaps also themselves, that they are decent, manly men.

As they grow out of the warm embrace of their parents, boys try to meet their need for touch through rough interaction with other boys. As they grow older, they may fumble into a relationship, limiting any physical contact to just one other person. This puts a lot of pressure on their partner and relationship. It also reinforces the ambiguation between touch and sex. Our libido can be assuaged with our own hand in a way that our craving for touch cannot: as every sex worker knows, many people who think they are hungry for sex are in fact hungry for skin. But it is possible to separate the two, even with people to whom we feel sexually attracted. 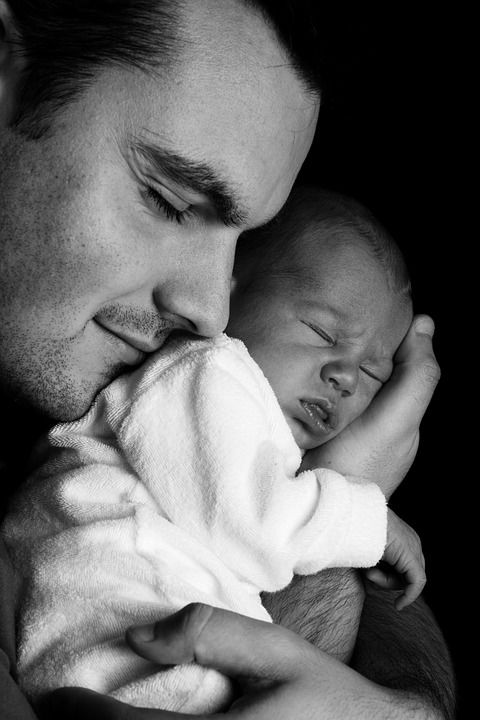 For men, outside of a sexual relationship, the only touch that is condoned is that between a father and his very young childen.
Source: Pixbay

To undermine the taboos surrounding it, I’m going to build a positive case for touch. Touch is probably the most primitive of all the senses. It is the first sense to develop, and is already present from just eight weeks of gestation. With a surface area, in adults, of around two square metres, our skin is the largest organ in our body. In a controversial experiment going back to the 1950s, the psychologist Harry Harlow offered maternally deprived infant Rhesus macaques a choice of two inanimate surrogate mothers made of wire and wood: one bare, and the other covered in cloth. The monkeys preferred the cloth-covered surrogate to the bare one, even when the bare one was holding a bottle of food. In 1994, the neurobiologist Mary Carlson, one of Harlow’s former students, travelled to Romania with the psychiatrist Felton Earls to study the effects of severe deprivation on the decretei children abandoned in understaffed orphanages. Typical findings included muteness, blank facial expressions, social withdrawal, and bizarre stereotypic movements, behaviours very similar to those of socially deprived macaques and chimpanzees. Recent studies have reinforced the importance of childhood physical contact, which has been associated with, among others, better performance on cognitive and physical tests, a stronger immune system, and reduced aggression. All else being equal, premature infants that receive a course of massage therapy gain considerably more weight and spend less time in hospital.

In adults, the benefits of gentle touch include: reducing stress and even protecting against it, lifting mood and self-esteem, strengthening interpersonal bonds, improving cognitive function, and boosting immune function. These effects are mediated by hormonal changes, including a lowering of the stress hormone cortisol and the release of the ‘love hormone’ oxytocin. The benefits of touch accrue to the giver as well as the receiver, as it is impossible to touch without also being touched. Even self-massage reduces stress levels, which probably explains why we are constantly touching ourselves: wringing our hands, rubbing our forehead, brushing our hair and scalp, stroking our neck and upper back, and so on. Even masturbation may be more about touch and stress than about lust itself: in a recent survey by TimeOut New York, 39% of office workers admitted to masturbating in the workplace. Compared to children, adults are less dependent on touch, but older adults, who tend to be more vulnerable, more alone, and more self-aware, are likely to need considerably more skin contact than their younger counterparts. Therapy animals have become a common in care homes, and, despite the taboo, I think residents should be encouraged to hold hands or rub each other’s shoulders.

Just as we use speech and gestures to communicate, so we use touch. Words can say, ‘I love you’, but touch can also say how and how much, and also, ‘I respect you’, ‘I need you’, and ‘thank you’. For a long time, scientists, being scientists, thought that touch served merely to emphasize a verbal message. But now it is clear that touch can be the message, and that it can be more nuanced and sophisticated than either speech or gestures, and more economical to boot. What’s more, touch is a two-way street, and a person’s reaction to our touch can tell us far more about them than their words ever could. Finally, while words can lie, or be taken for granted, primal touch is hard to either ignore or discount.

Touch can also serve to convince and motivate, so long, of course, as it is natural and appropriate. One study found that two-thirds of women agreed to dance with a man who touched her on the arm while making the request. When the man kept his hands by his side, his success rate fell by half. Students who, upon returning a library book, had their hand brushed by a librarian reported higher levels of satisfaction with the library and life in general, even if they had not been aware of having been touched. NBA teams with players who touched one another more, for example, by high-fiving or hugging during a game, went on to win more games, with the more touchy players doing best. Students who had been touched by a teacher tended to participate more in class activities, patrons who had been touched by a waitress tended to tip more generously, shoppers who had been touched by a store greeter tended to spend more money, and so on and so forth.

As a psychiatrist, I try to shake hands with all my patients, and often use comforting touch in moments of distress, almost invariably to very good effect. Touch not only calms the patient but also makes her feel that she has been seen and heard, and builds a bond of trust. It makes her, and me, feel more human, and, as a result, I think, we remember each other.

One thought on “Touch Hunger”